Corona virus disaster has turned out to be an eye-opening situation because of which many powerful nations have suffered and are still suffering. Number of small and big businesses are facing adverse impacts and Pharma industry is not an exception. China is the source of 40% of the global APIs & dominating 68.3% of chemical API market worldwide. In 2018, APIs exported from China accounted for 81% ($30 billion over $37 billion) of total value of exported Chinese pharmaceutical products. Indian pharmaceutical industry despite being a global market leader at generic drug formulations, largely depends on imported APIs from China. APIs which are used to manufacture at least 12 essential drugs such as paracetamol, ranitidine, ciprofloxacin, metformin, acetylsalicylic acid, ofloxacin, metronidazole, ampicillin, amoxicillin, ascorbic acid and some fermentation-based intermediates for which India solely depends on china.

I would not be wrong to say that the Covid-19 situation would not be so dire for Pharma industry if it was not China’s monopoly for major raw materials and chemical supplies. Domestic manufacturing potential was always neglected by Indians because of having 70% of imports from China for ages. Overdependency on imports always blocked our way toward Self-reliance. But I believe, every challenge comes with a solution. Although the Corona Virus crisis has turned the world upside down, many big nations including India are now trying to rise with new norms for life. In my opinion, our country has shown impressive moves during this period and is still blooming through this crisis.

The wise steps taken by Indian government for pharma during this crisis are one of the most important growth propelling factors. The government has now come up with two schemes for pharma; one is the PLI scheme which gives some financial incentives based on sales made by selected manufacturers for 41 products which covers around 53 APIs and the incentive ranges from 5-20% based on the incremental scales. That is going to help companies in terms of bridging the gap between the Chinese prices and India price to some extent. The second scheme which the government has come up with is the bulk drug park and this scheme is primarily to provide easy access to world class common infrastructure which will be located in these parks where companies can come, set up and make use of the common infrastructure. And this is again for a period of five years. As we need to build our strength, the government has come up with these schemes which should help in compensating price gap between China and India to some extent.

India is both competitor and customer of the Chinese API industry

We are currently the largest producers of generic medicines with a share of 20% of total global production, catering to over 60% of world’s demand. Third-largest medicine market in the Asia Pacific region with Well-established, strong local manufacturing capabilities, with an international export profile are the factors which are really highlighting our identity as ‘Pharmacy of the world’. India is by far the world’s champion of drug master files (DMFs). Drug master files (DMFs) are voluntary submissions to the import country authority, and contain confidential information about human drug products. APIs belongs to the Type II of DMFs, which is concerned with drug substance, material used in their preparation, or drug product. While China holds 12% of DMFs from the U.S., India holds almost half of them. Being the largest holder of DMSs gives India the edge to export higher-value APIs, enlarging the industry’s attractiveness. Indians generally speak better English than Chinese, which facilitates pharmaceutical trade with developed countries. Access to low cost vaccines, affordable generics & HIV treatment from India are some of the greatest success stories in Indian pharmaceutical industry. It is now widely accepted that without the likes of Sun Pharmaceutical, Ranbaxy, Dr Reddy’s Laboratories, Cipla and dozens of smaller Indian companies, many African countries would not have been able to cope with the public health challenges they face. No wonder India is called the “pharmacy to the world”.

Specialty areas to concentrate in future:

Nowadays, there is an area of interest in API domain called as HPAPI- High-potency active pharmaceutical ingredient, gaining its identity in Pharmaceutical market worldwide. They are APIs that require special handling due to toxicity and used in extremely small doses in finished drugs. Traditional examples of HPAPIs are cytotoxic compounds and sex hormones such as estrogen. Deeper analysis says that, the generic side of the industry will drive meaningful growth in the HPAPI market. Generics is one of the strongest domains in Indian pharma sector. Having said that, there exist bundles of opportunities in HPAPI sector for India. As per the latest report published by Research Dive, the global HPAPI market is estimated to generate 42,491.7 million and rise at a CAGR of 10.5% during the forecast period from 2020 to 2027. Oncology-focused medicines are one of the leading molecules creating maximum growth due to innovative pipeline candidates and upcoming generic entries. The Asia Pacific region is estimated to witness the fastest growth.

We are now emerging as a 2nd highest supplier base for generics with HPAPIs. Main API producers are headquartered in 24 different countries/territories, though most are based in either India or mainland China (Fig.1). New product introductions are a core growth driver for the generic API industry, and many of the upcoming opportunities are oncology-focused, high-potency compounds. Accordingly, many manufacturers across many territories have been making investments in HPAPI capabilities. Thus, companies should anticipate similarly high levels of competition as product markets develop. Looking at our nation who is blessed with ancient history of medicines and generic portfolio, profitable growth is anticipated in this area in near future. Rather than representing a well-differentiated, more insulated market segment, trends in HPAPIs are still aligned closely with the underlying dynamics of the pharmaceutical industry. Investments in this part should be viewed as essential steps to keep pace with the market.

Now looking into API security, the potential for insider theft exists at every level of the pharmaceutical production and distribution chain. Individuals employed at production sites, distribution centres, and pharmacies are all potential insiders. The API is stored in a secured vault until it is ready for use. It is then moved to the production area, where it is combined with inactive ingredients to make the final dosage form like pills. The pills are then packaged and sent out to distributors, leaving the control of the original facility that made them. In this whole process, there are chances that a small quantity of APIs can be lifted unofficially. Manufacturers can’t afford to overlook such malpractices as most of the APIs are highly expensive. Fortunately, at the pharmaceutical distribution sites, most employees are professionally licensed pharmacists and pharmacy technicians, bound by the ethical standards and keenly aware that a breach would result in the loss of their licenses. Quality assurance (QA) plays a central role in pharmaceutical production, and it is used as an element of theft prevention as well. At production sites, manufactured pills are pulled at random for QA checks. While these checks are primarily intended to ensure accurate formulation, they also provide a check against the diversion of API that would lead to detectable changes in pill formulation. Some more protective measures to avoid Insider theft which can be taken in terms of staff are mentioned in fig.2.

Everyone would agree with the statement that the pharma industry is one of the most resistance industry when it comes to adopt new technology. In the past, when cloud computing technology was installed, security was a major problem and was a primary reason why pharma companies would stay far from it. However, with time and recent technological advancements, security has become the biggest benefit of adopting the cloud technology.

Now, multiple layers of security are added to critical business data. Data such as contacts, sales tracking, patient information, content, and strategies are all heavily protected by the cloud, ensuring that your marketing operations remain safe and secure. The cloud is secured by encrypting data to be transmitted over networks and placed in specific databases. This encryption also prohibits access by internal team members who do not have authorized access to the data, which eventually shuts the idea of accessibility by cyber hackers. There is no way back when it come to adopting technology. In my opinion, getting familiar with such technologies and deriving highest benefits out of it is the topmost necessity in today’s world and pharma industry has to be ready for this. 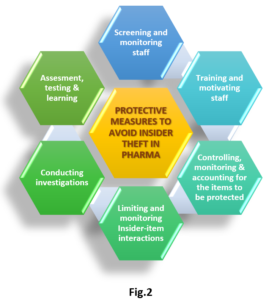 While surfing through one of the Analysis created by PwC, some of the recommendations grabbed my attension. They might not be easy to demonstrate immediately at this point but also are not unrealistic while planning for future strategies.

Some long term recommendations were:

Although we are one of the topmost players in the generic market, we still have struggled for a longer time because of high dependence on China. Our domestic API industry has been deeply affected because of policies such as stricter implementation of pollution control norms, implementation of DPCO, 2013, lower import duties, and complete collapse of the indigenous fermentation industry. However, favourable schemes from the government and a supportive financial ecosystem to boost private and foreign is a light at the end of tunnel and reviving our API manufacturing capabilities. MNCs like GSK, Pfizer, Novartis have been here for many years. We need to invite them to manufacture for exports in India. We have to look at setting up a kind of platform where we will use technology for consolidating sourcing, supply chain, regulatory, quality approvals and aggregate all the discreet capacities available from individual companies. This will enable collaboration and alliances with large global and domestic pharma companies.

In the slightly longer term, the government may look at the Chinese model and work on developing clusters for API and also can fuel our HPAPI manufacturing powers. API security and surveillance technologies at industry level is also one of the major factors which has to be taken care of. An emergency is inevitable and it always affects in a very unpleasant manner if we are not fully prepared to deal with it. Self-reliance is must and we have to get habituated to it. India for India and India for global is the strategy that we need to follow. Afterall we have to give justice to ‘Make in India’.