The 19th World Congress of Food Science & Technology was hosted by The International Union of Food Science and Technology (IUFoST), a country-membership organisation, and is also the global voice of food science and technology. It is the only representative for the discipline of Food Science and Technology elected into the International Council for Science (ICSU). It is a voluntary, non-profit federation of national food science organisations linking the world’s food scientists and technologists. IUFoST has over 300,000 members from more than 75 countries through its Adhering Bodies, and 5 regional groupings to form a pool of expert resource. 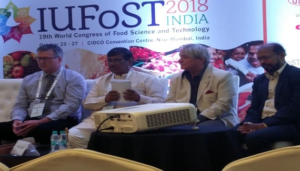 The 19th World Congress of Food Science & Technology was organised to showcase the global developments in all the facets of food science and technology through 60 plus parallel scientific sessions with the participation of 250 plus speakers with rich expertise in their respective areas of specialization. The Congress brought together Thought Leaders, Policy Makers, Researchers, Food Fraternity and Industry Captains to cover the latest advances in our understanding of Food in all its avatars.