Today’s era is ruled by customers and because of their smart networking skills they are termed as hyperconnected customers. With digitization the limitation to gain knowledge and information from various sources has ended and this has empowered customers to make better choices for themselves.

Thus, the industry has entered a phase whereby organizational metrics of success will de dependent on their alignment with customer success metrics. Well, this is supported by our user-friendly Internet, that has created irreversible networking system, accelerating globalization with technological outburst.

With growing opportunity there comes many challenges for marketers to address their message efficiently across wide categories of customer groups with fragmented data of customer experience. Thus, the biggest challenge for marketers is to connect dots and reflect accordingly. To assure no one moves your cheese, differentiate your brand and make it stand elegantly.

Some highlights to make you realize the importance of personalization, 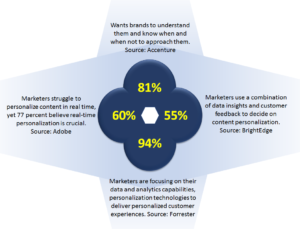 Let’s know more about Hyper personalization… it is customer marketing but targeting specific needs. It is advanced marketing where it leverages artificial intelligence (AI) and real-time data to supply more relevant content, products, and service information to every user.

Top brands like Amazon, Starbucks, Netflix have reached to level of predictive personalization whereby AI & Machine learning analyze our day to day data points which is known as “Big data” comprising of host of factors to power recommendation engine. They have access to data points such as name, requirement, average time spent on search, purchase history, favored brands, etc. using this, they craft a highly personalized email showing you relevant items.

Unknowingly, Pharma industry is moving towards personalization, whereby wearables, ingestibles, implantables are assisting in monetizing disease management programs at individual level. The model that helps us to do so is Ecosystem model. Ecosystem model allows you to focus on customer needs and help you to understand patient engagement, multi-channel and omni-channel communication strategies, sensors combined with patient data to predict future specific conditions are moving towards hyper personalization. What we need is to tap data points, whereby health data which can be actually termed as “Big Fit data” which will help us to deliver personalized solutions.

So, writing on the wall to Accept Reality, Reimagine & Transform IT & AI skills.

Year 2020 augurs well for the health conscious, as Indians are increasingly opting for preventive healthcare to stay fit rather than waiting for diseases to take over and then start treatment, say experts.

Nutraceuticals, which consist of vitamins and minerals, protein supplements, energy drinks and growth supplements, have clocked higher growth than prescription drugs. “Now the trend is that 60 per cent of doctor prescriptions include health and nutrient supplements. While pharmaceutical sales are growing in India at just above 10 per cent for the past couple of years, the nutraceutical and wellness market is growing at close to 20 per cent a year, which shows the Indians have become more health conscious and awareness is growing,” said Dr RB Smarta, chairman and managing Director, Interlink marketing consultancy and honorary secretary, Health Foods and Dietary Supplements Association (HADSA).

With more disposable income at hand and rising awareness on healthcare among the urban community, numerous people are opting for a healthy living. The trend of wearable and electronic devices to measure health parameters and mushrooming of gym and weight management centres are helping boost sales of nutraceuticals, he says.

Vitamin and mineral supplement sales in India were valued at about $0.7 billion in 2015. It is growing at a compounded annual growth rate of over 16.8 per cent to $1.3 billlion in 2019 and to $2.1 billion by 2022. Prominent dietary supplement makers in India include companies such as Himalaya, Dabur, Parry, GSK, Abbott, Zydus Wellness and Piramal. Many drug companies now have a separate division for selling nutraceuticals or wellness products.

“Many specialists such as diabetologists, nephrologists, gynaecologists and oncologists mostly write vitamins and minerals as part of the treatment protocol,” notes Dr Smarta, as another reason for the growth of nutraceutical sales.

Functional foods include food products such as functional biscuits, breads, cereals, vegetable oil, nutrition bars, yogurt and others. Functional beverages that include functional fruits juices, milk, tea, coffees, and energy drinks are growing at 18 per cent. Prominent companies in this segment include ITC, Amul, Dabur, Britannia, Kellog’s, Nestle and Coca-Cola, says the report.

It also says in terms of application, nutraceuticals are mainly consumed for nutritional deficiency (51 per cent), muscle building (30 per cent), weight management (15 per cent) and other uses.

Atul won the gold for a project to find out perception of chemists and consumers on herbal medicines. He has also carried out preferences for wound cleansing and generate awareness on newer molecules.

“We have been instituting the medal for the past four years at Insight. It will be a source of encouragement for ICS MCRC students who have excelled in the Live Project. There is a dearth of quality professionals in the pharma and healthcare industry in the country today. The industry and academia should encourage more such competitions, which could be good opportunity for spotting the right talent,” said Dr RB Smarta, managing director, Interlink.

Among its varied consulting roles in areas including branding and due-diligence, Interlink has also been instrumental in providing skills-related training to pharma professionals, customized to the needs of the industry.

Insight 2018 puts forth the perspective of patient care, patient delivery and patient monitoring in healthcare followed by panel discussion by industry experts.

According to Dr Smarta, time is ripe for the industry to move into a patient oriented paradigm from a product oriented one. This will help in improving the quality of a patient’s life along with achieving positive clinical outcomes at a realistic economic expenditure, he said. Modern data-based technologies help in achieving effective patient monitoring and thereby good patient compliance, he observed.